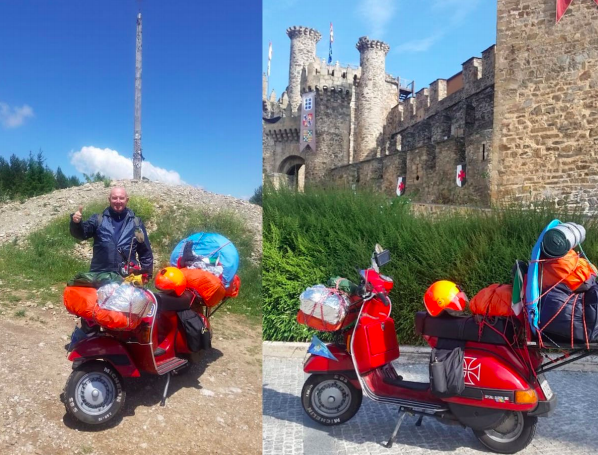 On a Vespa along the road to Santiago de Compostela

Twelve stages, from 30 June to 11 July 2018; 4,039 km traveled, between Italy, France, Spain and back (181 liters of fuel and 3 of oil mixture). A journey and a search for oneself done by our Borther Mauro through the places of the Faith that saw the presence of the ancient monks Templar knights.

From Lodi to the Susa Valley in Piedmont, then Claviere, heading towards France, stopping at the Montpellier campsite, then pulled up to Saint Jean Pied de Port; then, towards Roncesvalles, then Pamplona, ​​in Spain, during the preparation of the feast of San Firmino.

Stage in the evocative and ancient Hospital San Nicolas de Puente Fitero; the destination is approaching: Finisterre (between the westernmost points of peninsular Spain) and then a souvenir photo at km 0, which marks the end of the Camino de Santiago.

Visit to Santiago de Compostela, between the splendid Cathedral of St. James and the other historical places. Then directing the Vespa towards the return, Burgos and San Nicolas.

Mandatory step to the Templar castle of Ponferrada “Castillo de los Templarios”, in the province of León, bulwark against the Moors and fundamental starting point for the Reconquista of the Iberian Peninsula.

A last passage from Roncesvalles, then on towards Briançon, finally Italy, home! Mauro and “Chicca”, the beloved two-wheeled traveling companion, are tired but happy. And soon they will start again for another “journey of spirit and adventure”, as Mauro defines it. Good road! 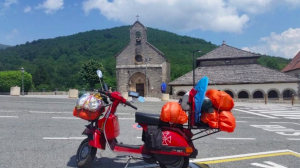 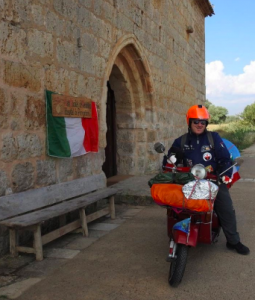 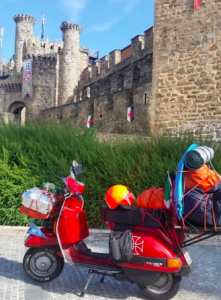 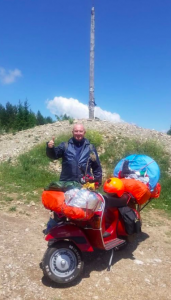