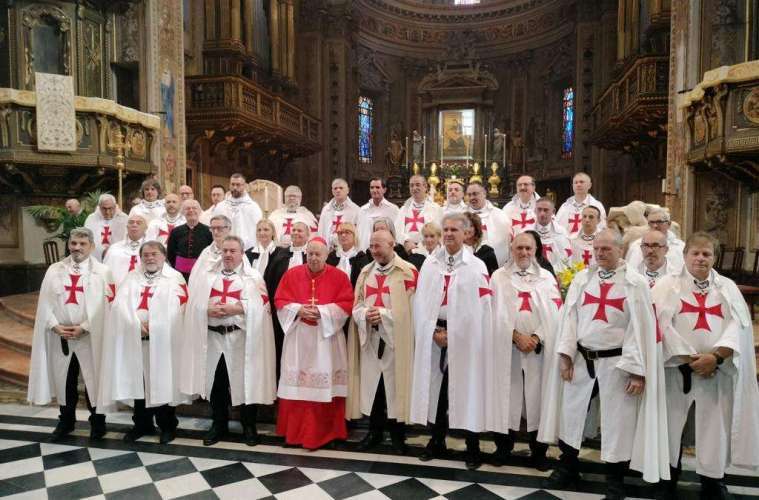 I know another Cavalry …

I know of another cavalry. So St. Robert of Molesme, together with St. Alberico and Stefano Harding, founders of the Cistercian Order, answered his father when faced with the proposal to become a knight of the kingdom with his cousin, in the fictional life told by M. Raymond.

Another cavalry… the cavalry that St. Robert had guessed by looking at the Crucifix attached to the cross on the house table; that chivalry of which St. Paul – on several occasions – already manifests in his letters with the humble pride and pride of those who feel reached by a greater grace: a noble grace, precisely, because noble – that is Lord / Kyrios – is He who grants it to those whose hearts are sufficiently dilated to welcome it.

Another cavalry… the cavalry gushed out on Golgotha ​​from the open side of Jesus: a lordship – his – manifested with the salvation offered to every man and the forgiveness invoked for his tormentors; chivalry that is felt to arise from within by standing in front, as has happened to many members of this glorious order, in front of the Shroud that reverberates the passion of Christ.

This chivalry, with an ancient and very current flavor, is what moves the meeting and inspires the intentions of the Catholic Templars in this time when humanity appears so orphaned of chivalry and, above all, of God. of God, the exclusion of his Law summarized in the historical person of Jesus – the Word made flesh, crucified and risen – and the consequent pride of the mind and heart of men, are at the root of Evil which, as Prince of this world, it is spreading in society and even within the Church, according to the famous expression of Blessed Paul VI who on 29 June 1972, referring to the ecclesial situation, stated: through some cracks the smoke of Satan has entered the Temple of God.

Then, the venerated and blessed Pontiff, with his vibrant voice noted with particular prophecy: there is doubt, uncertainty, problems, restlessness, dissatisfaction, confrontation. We no longer trust the Church. Doubt entered our consciences, and entered through windows that instead had to be opened to the light. And further on he continued: Even in the Church this state of uncertainty reigns. It was believed that after the Council there would come a sunny day for the history of the Church. Instead, a day of clouds, storms, darkness, research, uncertainty has come. And he asked himself: How could this happen? The Pope confided to those present his thought according to which an adverse power had intervened in the world and in the Church, a power whose name is Satan. We believe – observed Paul VI – in something preternatural that came into the world precisely to disturb, to stifle the fruits of the Council, and to prevent the Church from breaking out into the hymn of the joy of having fully regained self-awareness.

After a few months, Paul VI spoke again on this theme. It was November 25, 1972 when during the general audience the Pope began as follows: What are the major needs of the Church today? Do not be surprised how simplistic, or even how superstitious and unreal our response: one of the greatest needs is defense from that evil, which we call devil (…) Evil is no longer just a deficiency, but an efficiency, a living being , spiritual, perverted and perverted. Terrible reality. Mysterious and scary. It leaves the framework of biblical and ecclesiastical teaching that refuses to recognize it as existing; or who makes it a principle in itself, not having it, like every creature, originated from God; or he explains it as a pseudo-reality, a conceptual and fantastic personification of the unknown causes of our ailments.

It was, then, a serious and prophetic affirmation. Today it is a very serious but very timely reflection. Our time is the one prophesied by Blessed Paul VI: a time in which rare are those who recall the existence and industriousness of the Evil One. Instead, empty hell is proclaimed in the name of an unspecified or evangelical do-goodness that forgives everything because everything is silent… misunderstood, and that is totally different from that Mercy, which the Supreme Pontiff Francis is constantly recalling. The advent of a universal brotherhood is announced, the fruit of a criminal and falsified “human ecumenism”, forgetting – as the Apostle warns – that it is Christ, and only He who has reconciled peoples and nations in his crucified flesh. We fight, we divide, we move away by contrasting that culture of encounter which, otherwise, is so well present in the path of conversion of the Catholic Templars.

Faced with this horizon that Pope Benedict XVI, Bishop Emeritus of Rome, defined relativism, but which we can also define religious syncretism or the smoke of Satan, only one sign still needs to be raised to the watershed between truth and truth; between the Way and the streets; between Life and surviving; between Christ and the Liar: it is the sign of the Cross, the sword with which Christ himself definitively changes the fate of human life. A cross that is above all glorious as the ancient hymn Vexilla Regis sings:
The King’s banner advances, the mystery of the Cross shines, on which Jesus, our life, suffered death and with death gave us back our life. After being wounded by the cruel tip of an impious spear, he dripped water and blood to wash us from sin. O luminous Tree tinged with purple direction, chosen among all to hold up the holy members of Christ.

Blessed Cross splendid raise the King of the ages with his precious blood redeemed us from evil. Altar and you, victim, hello! Bloody death is glory, life that suffers death, with death life gives us. Hail or Cross, only hope, in this time of the Passion, increase the grace to the just and cancel the sins of sinners. O Most High Heavenly Trinity, May every spirit praise you, always protect those you have saved with the mystery of the Cross. Amen. (Vexilla Regis Hymn).

The Banner of Christ, in which the mystery of our universal salvation shines, is not so much the object of worship as the subject that moves the Catholic Templars in their daily commitment to fight to build the “Civilization of love”, through the many prayer meetings, spiritual retreats, reopening and decorating of closed churches, often abandoned to the work of Satanist movements. That clear Cross, affixed to their clothes, is the memory of an inner passion from which gushes the strength, enthusiasm and passion to wage the good fight of faith against Satan and all his multifaceted form of adepts. As Christ received by embracing the Blessed Cross so did the Catholic Templars, it is required in the name of that highest and noblest chivalry in which they have been made partakers, to embrace and let themselves be led by the Cross, gradually and steadily assuming its profound spirituality.

Yes, the Cross generates spirituality first of all because on it, says the Gospel, Cristo emisit spiritum: – Jesus, the Messiah and Lord, the Alpha and Omega of history, the Amen of God has thrown out himself – says a radical literary translation – his spirit chespirat ubi vult – which blows where it wants, tracing every man who seeks God in order to then dwell there. As at the dawn of human history God the Father emisit spiritum in the nostrils of Adam giving him life, so on the Cross the Lord emisit spiritum to regenerate the children of God, to give them salvation by infusing the grace of eternal life, to wash them from sin and to restore the right measure of sonship. And so these men and women, Catholic Templars, operating in the world, without wanting to appear to the world but pay to be present to God, in obedience to the Church and in communion with His Magisterium, spread the “perfume of Christ: odor of life for life”(cf 2 Cor 2: 15-16), bearing witness to the hope that is in them (cf 1 Pt 3.15).

The Cross then generates spirituality for Christians, recalling the high honor and burden of obedience. St. Paul writes in the letter to the Philippians: Christ Jesus, despite being of divine nature, did not consider his equality with God a jealous treasure; but he stripped himself, assuming the condition of a servant and becoming like men; appeared in human form, he humbled himself by becoming obedient to death and death on the cross. This is why God exalted him and gave him the name that is above any other name; so that in the name of Jesus every knee should bend in the heavens, on the earth and under the earth; and every tongue proclaims that Jesus Christ is Lord, to the glory of God the Father (Phil 2: 6-11). Embracing the Cross, the Catholic Templars embrace Christ himself in the total gesture of his abandonment to the Father foretold in Gethsemane, where in the silent company with the Father he pronounced those words, moving summary of his life: Father, pass this cup from me; yet not mine but your will be done.

And it is this obedience to the Gospel, rooted in obedience to the Church, that one encounters in meeting the Catholic Templars.
But still. The Cross recalls the value of courage that comes not from pride but from passion and from the heart. Just as the Lord does not undergo the Cross but grabs it to bring it to its fulfillment, so at his school even the Templars of today do not undergo the crosses of indifference or judgment, but carry them with the courage infused in their hearts by a more love. great: the one brought to Christ and His Church. And for this, in hiding and in the humble and constant industrious presence in every part of the world, and also in the world, they become real witnesses in the existential peripheries, those of which many often speak but few live there. Yet, it is precisely there, in the built indifference or malevolent interest, that the Catholic Templars, experiencing blissful solitude, only bliss (attributed to St. Bernard but attested to a Latin poet of the sixteenth century, Corneille Muys), experience the joy and the victory of Christ’s love.

The victory of the Cross, in fact, is the victory of Christ’s love and is the glory of the Templars. It is the dawn of light, it is the flourishing of new life, which green on the salutary trunk of the Cross.
Looking at Christ who wields his sword and even in suffering, he raises it with force as he walks towards Golgotha, aware that the Father’s plan is fulfilled in it, the Templars of yesterday and today repeat with St. Paul: As for me… not there may be other boast than in the cross of our Lord Jesus Christ (Gal 6:14); and aware that the crucified flesh of Christ is present in the crucified flesh of man, they work reminding one another that glory is to be given only to God: Non nobis Domine, non nobis: sed Nomini Tuo da gloriam (cf. Ps 113) .